We have been dealing with interior and exterior decorating under the Dahlia trademark since 1991. We primarily focus on the spa triangle of Karlovy Vary, Mariánské Lázně and Františkovy Lázně, where we have realised many decorations for hotels, various boutiques, jewellery shops, institutions and private events.

In the past, we have cooperated with the following: Grandhotel Pupp, Imperial Hotel, Astoria Hotel, Thermal Spa Hotel, Château Monty, Excelsior Hotel, Cristal Palace Hotel, Climate Sanatorium, Becherplatz, among many others…

We also provide decorations for various social events, balls and concerts. We cooperate with the city of Karlovy Vary, with the Karlovy Vary Symphony Orchestra and the singer Lucie Bílá; we not only decorate these venues during Christmas concerts, but many celebrities also have their Christmas homes decorated by us.

For a long time now we have been cooperating with the opera singer Pavlína Senič, who recorded a Christmas CD for the Christmas House with the opening song Christmas House. Honza Musil is also a frequent guest, combining his visits with charitable activities.

The Christmas House has also become a popular place to shoot video clips for Christmas-themed songs.

In 2020, Lucie Bílá made a video for the song Tambor with us, the singer David Deyl has already made two video clips with us! To the following songs: Svatý Čas / Santa Claus is Coming to Town and Somewhere in My Memory

We are also often approached in connection with the shooting of various commercials and photo shoots of a winter or Christmas theme. 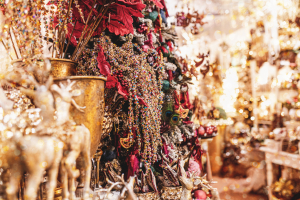